My rebuilding posts seem to be growing in popularity. It's one of the few series where I am actively getting requests. At Bricks Cascade this last weekend, Ben asked me if I could analyze the Green Grocer. It's one of the sets he missed out on but the aftermarket prices are a little steep. Not nearly as bad as, say, the Millenium Falcon, but still around $1000.

If you still aren't familiar with using BrickStock, hit up the Falcon post (link above) to see a brief tutorial at the beginning of that article. For the rest of you, let's dive in! 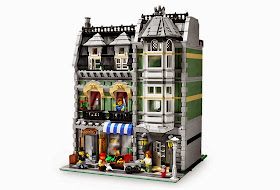 Open up BrickStock and load in the Green Grocer. Get the value of the parts (Ctrl-A, Ctrl-G), then get the most expensive to the top (click, click). Notice that the parts value is already at $758, roughly a quarter less than purchasing one. Maybe we could have something here.

The panel can be changed to the new variant with side supports. However, this will slightly change the look of the Palladian window on the third floor. Two of the original panels cost over $17. Two of the new variants will be $0.13.

The next spendy item is the 1x2x3 train window. I don't even know the point of using the train style. The features of it are turned to the inside and no glass is used. My assumption is that the flat front 1x2x3 window was not produced until after this set was designed. In that case, change the train window to a 60593 and save about $32 on all four pieces.

Per my previous posts, you might know that I strike the figs from these sets. If you are recreating for resale, then you'll want them in. If this is a display piece, you'll either not care what the figs look like or you may not use them. $26 saved if you choose not to use them. If you're cutting the figs, you could cut the cat too at $2.75.

As with the Cafe Corner, two 16x32 baseplates are unnecessary. The model is not built to split open. Replace them with a single $8 32x32 baseplate. Change the number to 3811, quantity to 1 and physically change the price to $8. 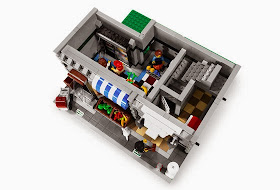 Next click the black door then sort by description. You'll notice that there are both variants of doors for all three colors. The Type 1 door is the older style and is more expensive. Obviously. Highlight all three of those variants and note that the price is around $32. Now highlight the Type 2 variants. A grand total of $4. Strike the Type 1 doors.

Note that this only catches 3 variants. Click the "Status" column to find the others. Scroll all the way down. Whenever you see doubles, strike the most expensive one. In most cases it will make little difference but it will clean up your end result. Note that all the extras are just above this. The original set came with 54 extras totaling under $4. Might as well remove them all.

Now go back to the top and sort by the "Total" column. You'll notice right away that Sand Green bricks top the list. It's hard to replace a basic brick, but what if we could replace a color? Crazy? Select the 1x8 brick and click the "Color" column. We only have 6 unique pieces to try to replace. Highlight them all and let's have fun.

Total value of all 243 parts is $316. My first thought is to try the newer Olive Green. It's a bit yellower, and I don't think we'll have good luck with the hinge base or slotted bricks, but let's try. Sure enough, those two parts don't exist in Olive. The hinge base is easy though. Two of them are hidden by the outdoor vegetable display. Five others are hidden within the roof. Change the color to anything else. Black would work and takes $1.20 off the price EACH. That's $8 of savings. 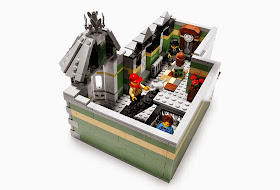 The slotted brick is going to be a little challenge. It's used for architectural appeal in several places. You could possibly change it to Light Bley/Medium Stone. The total price drops from $111 to $13. Or change them to plain 1x2 Olive Green bricks and drop the price to $10. If you want to see some architectural variety, you can replace them all with triple the number of 1x2 plates. That would be $18 for the lot. If it was me I'd be inclined to go the plain brick route, then hope that TLG made some Olive Green slotted bricks in the future.

Or, change the style up a bit and replace every single Sand Green brick with a bunch of brick bricks. It doesn't change the price much per stud, but it would have a WAY different look with pieces that would be much easier to source.

For the remainder of the bricks, Olive Green drops the price from $180 to $48.

Click the "Total" column again to get the spendy items up top.The Dark Red inverted slopes are $3 each. As much as I love the color, it is obscured slightly by the window glass in front of them. Maybe we could change them to Reddish Brown? That also requires changing 8 of the 12 1x1 bricks as well. Highlight the inverted slopes, sort by color, then select the 1x1 Dark Red bricks. Ctrl-C, Ctrl-V to create a second lot. Answer "No" to both pop-ups. Your new lot will be at the bottom. Change the color to Reddish Brown and the quantity to 8. Go back up to the Dark Red colors and change that 1x1 brick lot to quantity 4. Then change the color of the inverted slope to Reddish Brown. Ctrl-G that item. A change to Dark Purple would net the same savings.


The Light Bley/Medium Stone 1x8 bricks are expensive. It would not be completely unreasonable to replace them with twice the quantity of 1x4 bricks. Change the part# to 3010 and the quantity to 58. This drops the price from $11 to $7.

The Tan 1x6 arch is rather expensive and can be replaced with a newer and subtle variant. Change the part# to 92950 and watch $8 melt away. Changing the lamp post to part# 11062 drops $1. 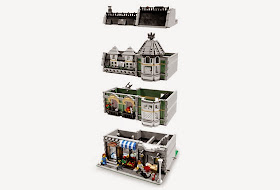 Select all and Ctrl-G to get the price at this point. I see $358. That's amazing! We've cut the price by well over half! Don't forget that this is the Olive Green version, at least mine is. If you've kept the Sand Green, You'll be a little over $600. There's not much more to consider at this point that would make a big difference. Maybe changing from new to used pieces. Maybe some minor details of replacing longer bricks or plates with shorter ones. Or replacing the 2x16 plates with any other available color. Bear in mind that you have some complicated ceiling assemblies to build. Don't cut the plates down too small or you'll have structural failure. Double check the instructions to be sure.

You can now export to your Wanted List on either Bricklink or BrickOwl.